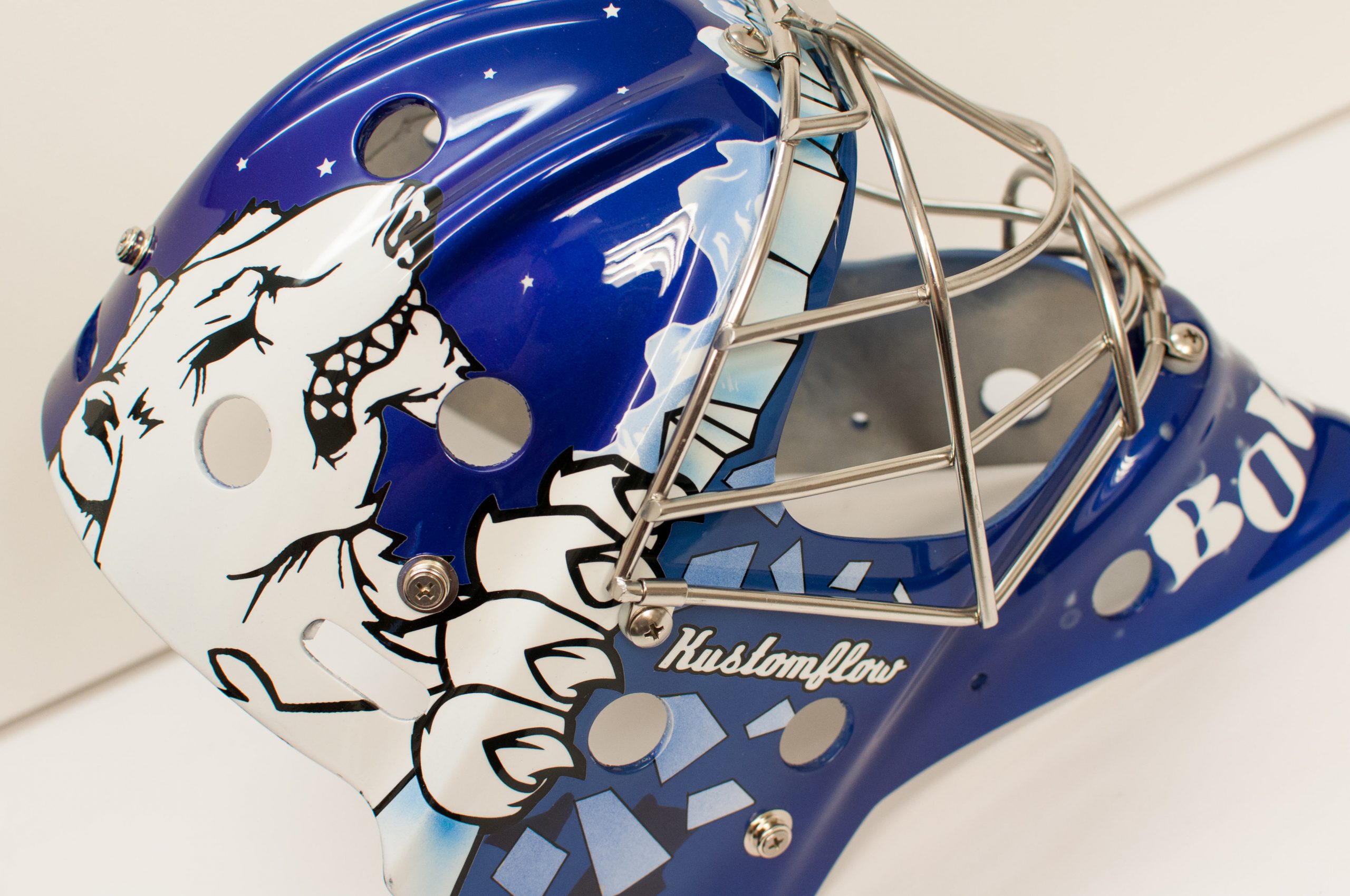 For the second season in a row I have collaborated with the Hull Stingrays #1 netminder Ben Bowns and have airbrushed his goalie mask.

Ben was pretty keen to update his mask from last season after it took a bit of beating in the top flight Elite League and international games. If I’m being honest, it held up a lot better than expected! with pucks hitting the helmet at speeds of up to and above 100mph it really didn’t look too bad when Bownsy brought it in for a refurb.

He loved the previous design of a polar bear smashing through the igloo and wanted to keep the same design and just touch it up – I managed to persuade him to have a full new design done with a similar theme to his liking.

We pretty much knew what was to go on the helmet and Ben left it with me. My first biggest challenge was to remove all the rusted screws and bolts, and remove the padding so it didn’t stink as bad!

With padding removed and all fittings detached I was able to make a start on the paintwork. The existing finish was sanded right off, any chips were flatted out to leave a nice new surface to paint on.

The helmet was re-primed, the base coats applied and then the graphics airbrushed onto the helmet, before being relacquered to a high gloss finish. New screws and fittings were attached to replace the previously rusted ones and the padding was cleaned up (shame Ben didn’t want me to replace them, they stunk!) – pretty much a complete rufurbished helmet ready for another season of the Elite League Ice Hockey.

The new design features more darker blues – truer to Hull Stingrays colours than the last design. The polar bear remains, although he’s back bigger than last season and a lot meaner looking – patrolling the ice. We decided to have an underwater theme on this seasons design and added some stingrays and a jellyfish (something Ben requested) and the name ‘Bownsy’ on the chin in an underwater font surrounded by bubbles.

Ben was more than chuffed with the overall design when he collected it, ‘even better than last seasons’ was his response. I’m looking forward to seeing it back out on the ice this season, and I know Ben is pretty keen to wear it too!

Hull Stingrays kick off their 2013/14 regular season against the Nottingham Panthers on 7th September at the Hull Arena – for more information visit www.hullstingrays.net