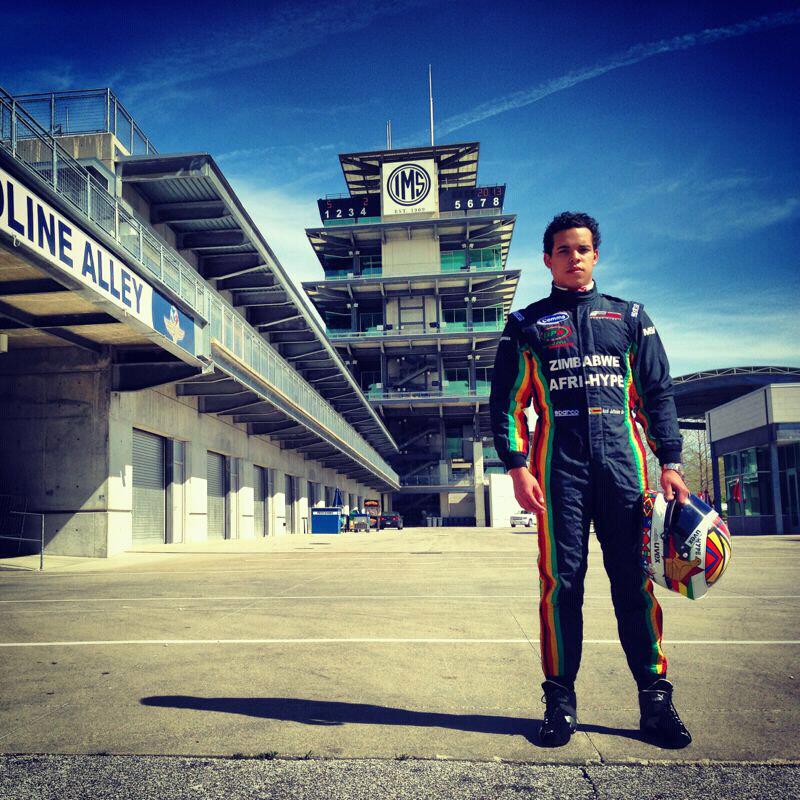 I am pleased to announce that Kustomflow has been named as the official custom helmet painter for Axcil Jefferies Racing Team.

After being approached by Axcil and his management team late in 2012, I can proudly say that Kustomflow is now a fully affiliated sponsor of Axcil Jefferies (Formula 2). Providing the Zimbabwean racing driver with his first custom painted helmet in time for the 2013 Formula 2 season.

The design features a lot of Axcils native Zimbabwean heritage from the black, green, red and yellow horizontal stripes found on the national flag which wrap around the sides and back of the helmet, to the native Soapstone bird and the red star. The Soapstone bird represents the history of Zimbabwe, whilst the red star beneath symbolizes Marxism, and the ‘revolutionary struggle for liberation and peace’. Axcil was keen for the bright colours of Africa to be shown proudly on his helmet design, so we worked together to create some unique patterns which feature predominantly on the top of the helmet and around the bottom of the full helmet. The white ‘halo’ bands were used to display Axcil’s sponsors in prominent places. These include UVEX who produce his FP-5 GT helmet and Afri-Hype.

” The helmet design is the first of its kind with African Art and Kustomflow pulled it off. Our fans have loved it, the helmet has attracted more likes and comments on my facebook page than anything else in my career ” – Axcil Jefferies

Axcil Jefferies is currently the only Zimbabwean driver currently racing internationally. Born in Slough, England, Axcil grew up in Zimbabwe an spent most of his career racing in South Africa, beginning with karts at 6 years old. Axcil was granted special permission (being only 14) to test a Formula BMW, which then led to a BMW scholarship and a seat in the 2009 Formula BMW Pacific championship with Eurasia Motorsport Team, coming 3rd overall, winning 2 races and finishing on the podium 6 times.

Back living in England, in 2010-11 Axcil was identified as an elite athlete by the British Motorsport Association. He was given a scholarship to attend Loughborough University and to join the MSA Academy, currently studying Sports Science and Psychology. For more information about Axcil – visit www.axciljefferies.com.

Update – March 2013. Unfortunately the MSV and FIA have decided not to run the 2013 Formula 2 Championship, which has left Axcil looking for a new competition to race in.